PHiSH -20th Anniversary Video Montage- 12/2/2003 Boston, MA. This half hour video played in the Fleet Center during set break, and consists of footage of the band progressing through the years. It began with extremely early footage of the band playing “Fluffhead” in what appears to be a dormroom, and ran through video of such famed shows as The Alladin Theater, the “Dog Log” show, Halloween 94 and 95, NYE 94-98, as well as several clips of Cypress and the reunion show.

Check out this Pollock designed holiday card in celebration of Phish’s 20 anniversary 12/2/2003, for sale here 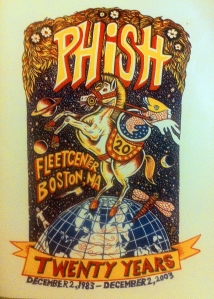 Setlist from Tuesday, 12/02/2003 FleetCenter, Boston, MA – courtesy of phish.net
Set 1: Harry Hood > Cavern, Birds of a Feather, Ya Mar, Horn > Piper > Anything But Me, Water in the Sky, Down with Disease

This gig commemorated the 20th anniversary of the first Phish show. In the audience, a section of seats were roped off to make way for a music stand. The music stand held a three-ring binder that contained lyrics from the Phish canon, but it did not play an active role in the performance. Ya Mar contained teases of The Tra La La Song (One Banana, Two Banana). At the end of Disease, a video screen descended behind the stage. As the house lights remained down, a 25+ minute video was played featuring retrospective highlights from throughout Phish’s career. Before the second set, Mike brought out a tray of desserts and shared them with fans in front of the stage. Highway to Hell was briefly teased by Trey before Rock and Roll. Weekapaug was unfinished. Tweezer Reprise included lyrics (sung by Trey) from Mike’s Song. Appropriately, the post-show house music was the Beatles’ song Sgt. Pepper’s Lonely Heart’s Club Band (which begins with the lyric, “It was twenty years ago today…”).